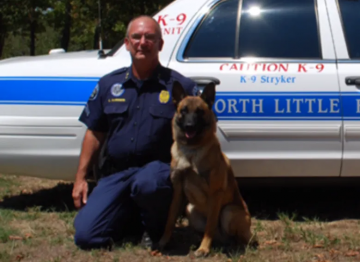 Criss Gardner established VKSWD in 1988. Prior to 1988, Criss was in the Air Force and going to college full time. Criss finished his degree in Engineering and set off to enter the civilian world. Criss had trained several sport dogs prior to this and actually had the first IPO 3 Dog in the state of Arkansas. Training dogs was a hobby and Criss traveled all over the country to compete. Later, Criss began training with local law enforcement handlers .

Very quickly he realized that this was a passion and the need for excellent working dogs in the area was a must. Criss began training police dogs and was drawn to law enforcement. In 1988 Von Klein Stein (Meaning "From Small Stone", or From Little Rock) was created. Criss became a police officer with North Little Rock Police in the early 90s and quickly began working a dog on the streets. During the past two decades, VKSWD has provided training to hundreds of agencies throughout the country. Along with teaching numerous seminars in the United States, VKSWD has Acted as a judge at National Police K9 Olympic events and certifying official to the National Narcotic Detector Dog Association for narcotic, explosive and patrol dogs. VKSWD is a full Service training Facility with over 20 acres and endless resources at its finger tips.

VKSWD was created for police with an emphasis of officer safety. We've been there and understand what is needed to be successful. We're the only kennel in the State that can make that statement. We take pride in the dogs that we import and use only the most reputable kennels in Europe. If we wouldn't put a dog on the streets with our Officers, we wouldn't sell it to you. We provide the Total Police Dog along with the training to keep you safe. - Joe Smith 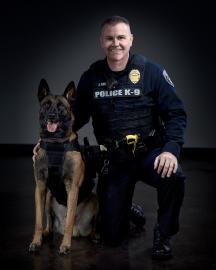 Joe is the owner of VKSWD. He is a former Marine and is a K9 Handler for North Little Rock Police Department. He started his law enforcement career in 2005 with the Washington County Sheriff's Office after being honorably discharged from the Marine Corps. Not long after entering law enforcement, Joe began handling his first VKSWD K9. Joe grew in the K9 world under some of the sharpest K9 minds in Northwest Arkansas.

He left Washington County for an opportunity to work with the finest police department in the state, North Little Rock PD, where he currently handles a dual purpose narcotics K9. Joe began an apprenticeship under Criss Gardner early on with a focus on patrol dog tactics. Training police dogs is a passion for Joe. He takes pride in every dog that passes through VKSWD. Joe has trained dogs, taught seminars, and helped build stronger, more productive K9 units across the country. Joe specializes in K9 tactics and has been instrumental in implementing tactics to K9 teams in Arkansas. Joe is a certifying official for the State of Arkansas.